(Chandra Loveguard) The Simpsons ain’t got nothin’ on Ingersoll Lockwood, author of the seemingly prophetic book The Last President. Or do they???

As we have now witnessed a Trump Presidency seemingly in full, it is time to revisit some very strange predictive programming and/or prophetic revelations that have filled our minds with all kinds of ideas and speculations over the years.

1900; or, The Last President is a book written in 1896 by a lawyer-turned-author named Ingersoll Lockwood. Many are aware that the United States Corporation went bankrupt in 1999 after the Chads electoral ruse, described in detail by Russel J. Gould. Others say the final details of the bankruptcy took place last year and therefore, President Trump could be seen as the “Last President” of the Corporation. What Biden is, is anybody’s guess. Some say, he is an imposter president who stole an election and is therefore a “foreign agency” being tolerated, for the moment. Meanwhile, mainstream media strictly censors anything to do with election fraud while championing the masquerade ball wherein there is a Biden win.

Uncannily enough, in the book The Last President, author Ingersoll Lockwood wrote about a rich man who unexpectedly became president much to the dismay of many. This man had a hotel on 5th Avenue in New York City very close to the location of Trump Towers and on the same street. If that’s not weird enough, amongst his named cabinet members, there was one Lafe Pence, Secretary of Agriculture.

The possibly prophetic or maybe predictive programming-style antics continue into the wild blue yonder of our modern yearning for comprehension of these crazy happenings. Antifa-like mobs are said to run rampant in the streets in the story, while people are asked to quarantine themselves for safety, and the whole thing gets pinned on the pres. Whaddya know.

Sound familiar? Yes! Remember back in 2000 when The Simpsons episode Bart to the Future predicted Trump would one day take the reigns as President? And low and behold, when we revisit the episode, it seems to set the stage by subliminally preparing us for Trump to be framed for what many suggest were actually Antifa’s misdeeds combined with covert COVID economic antics. Fascinating! 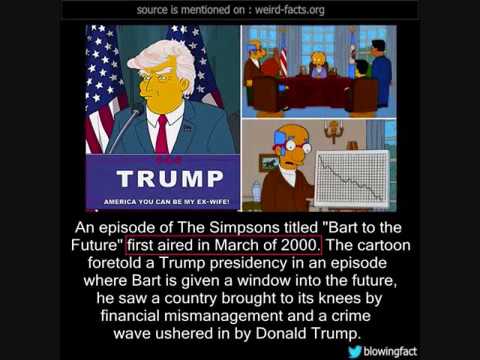 Who makes this stuff up??

Replete with conversation about a Declaration of Dissolution wherein certain parts would leave the Union in an effort to save the Republic, the similarities to our current times are indeed stranger than fiction. Is there some Wild Wizard behind the curtain keeping us all on the edge of our seats with these “coincidences?” And if so, why? What is the meaning of it all? Is it to dupe us and loop us into unwanted timelines of dictatorial madness? Have our Galactic Counterparts devised an outlandish plan to wake up sleepy-headed people so they can ascend, as some gallant seers suggest? Did Trump time travel back to Lockwood’s day to inspire him as time-travel enthusiasts suggested once they learned Trump’s Uncle was the recipient of Tesla’s manuscripts? Or is it sheer entertainment for a culture too curious for its own good?

If there is any rhyme to the reason, perhaps the Simpsons will do us a favor and create a special episode to clarify things for us. That would at least be something to cut our teeth on.

Meanwhile, have fun stormin’ the castle of consciousness! If you can figure it out, certainly do let the editors of this fine publication know. ;) READ THE LAST PRESIDENT ON ARCHIVE.ORG

Be sure to check out Part 2 here for more spookiness. Chandra Loveguard is a researcher, seasoned writer and Patriot who questions everything, envisions the best for our communities and families, our country, and our world. She also holds The United States of America dear and acknowledges the vision of the Founding Fathers for this country to be a beacon of light and freedom for all the world.

This article (The Last President of What, Exactly? (Does An 1896 Book Foreshadow Current Presidential Escapades and What Do the Simpsons Have To Do With It?)) originally appeared on StillnessintheStorm.com and is free and open source. You have permission to share or republish this article in full so long as attribution to the author and stillnessinthestorm.com are provided. If you spot a typo, email sitsshow@gmail.com.