(Larry Johnson) When Vladimir Putin announced the twin goals of the Special Military Operation in February–i.e., demilitarization and denazification–it sounded strangely familiar. Well there is a reason for that. At the end of World War II, the UK, the US and Russia reached an agreement at Potsdam. Not surprisingly, it was called the Potsdam Agreement.

[D]uring the Potsdam Conference, on 30 July 1945, the Allied Control Council was constituted in Berlin to execute the Allied resolutions (the “Four Ds“):[11][12]

Putin’s reiteration of the Denazification and Demilitarization principles established from the 1945 Potsdam Conference is not just some quaint tip of the hat to history. He was laying down a marker to the United States and United Kingdom that the agreement reached at Potsdam in 1945 is still relevant and valid.

The Russians have good reason to be angry that the West failed to carry through on denazifying Germany. Very few of the Nazi men and women involved in carrying out the war against the Soviet Union and implementing the extermination of the Jews of Poland, Ukraine and Russia were tried and convicted of war crimes. In fact, prominent Nazis remained in power in the “new” Germany:

From 1949 to 1973, 90 of the 170 leading lawyers and judges in the then-West German Justice Ministry had been members of the Nazi Party.

Of those 90 officials, 34 had been members of the Sturmabteilung (SA), Nazi Party paramilitaries who aided Hitler’s rise and took part in Kristallnacht, a night of violence that is believed to have left 91 Jewish people dead. . . .

In 1957, 77% of the ministry’s senior officials were former Nazis, which, according to the study, was a higher proportion that during Hitler’s Third Reich government, which existed from 1933 to 1945.

U.S. intelligence scooped up and protected a number of Gestapo murderers in the name of fighting communism. The most prominent of these was Klaus Barbie: 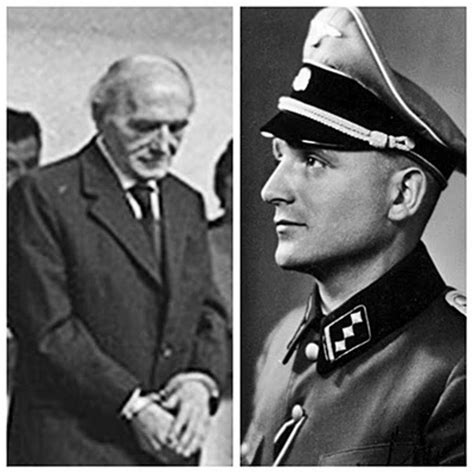 ‘KLAUS BARBIE: The American Connection” looks at the postwar involvement of United States intelligence officials with the man who was called the ”Butcher of Lyons.” That there was such an involvement is certain; that Klaus Barbie committed monstrous crimes is certain, too. The question is whether the American agents were morally culpable in dealing with, even protecting, the former Gestapo officer. ”Klaus Barbie,” a ”Frontline” documentary, suggests they were. . . .

[Barbie] from 1942 through 1944 he was the head of the Gestapo in Lyons, France. After the war he was a paid informant for the Army Counter Intelligence Corps. When the French attempted to arrest him for war crimes, American agents thwarted them, and in 1951 they smuggled Mr. Barbie out of Europe. Last February, he was extradited from Bolivia to France. He will be tried there for ”crimes against humanity.”

Putin’s suspicion about the United States and the United Kingdom being enablers and protectors of Nazis is not paranoia, rather it is a reasonable belief based on past and current events. Just because Americans display gross ignorance of their past ties to Nazis and are willfully blind in dealing with the legion of Bandera supporters firmly embedded in the current Ukrainian government, does not mean the present day Nazi threat is illusory. It is real.

The Nazis of World War II killed between 8,668,400–10,000,000 Russian soldiers. Almost twice as many Russian civilians died as a consequence of Nazi attacks–“In 2020 Mikhail Meltyukhov, who works with the Russian Federal archival project, stated that 15.9-17.4 million civilians were killed on Soviet territory by the Nazis during the war.”

The failure of the Untied States to understand the depth of Russian outrage and opposition to all things Nazis is rooted in American ignorance of the staggering losses and horrific pain the Russian people endured. These deaths were not because of Stalin’s brutality. They all came at the hands of Germans and the Russians have not forgotten. The men waging war to wipe out the Nazis in Ukraine are the grandsons of men and women who paid in blood fighting the first Nazi wave unleased in 1941 with Operation Barbarossa. They have not forgotten. America is making a potentially fatal mistake if it dismisses this fact as something peripheral and meaningless.