(Stillness in the Storm Editor) Benjamin Fulford’s report from October 11th, 2021 has been updated. Click here to read the full report. This post serves as a notice that the original has been updated. Scroll down to where it says:

The talks, “held behind closed doors in a Zurich airport hotel,” were led by US national security adviser Jake Sullivan and his Chinese counterpart, top diplomat Yang Jiechi. Public statements by both sides used phrases like “candid” and “wide-ranging.” The US side also said China should “avoid miscalculations that could cause competition to veer into conflict.” Sullivan later said, “I don’t think he [Yang] necessarily accepted our view.” In other words, threats and promises were made but no agreement was reached.

This is the sort of official commentary issued by China after the talks:

Raising the debt limit does not authorize new federal spending, but only allows the Treasury Department to borrow additional funds to cover expenditures that have already been approved by Congress but, with an extension lasting mere weeks, the United States still faces the real possibility of defaulting…”Because the United States has never defaulted on its obligations it is expected to be widespread and catastrophic for the U.S. (and global) economy,” economists at the White House Council of Economic Advisers said in a blog post earlier this week.

Also, the US side apparently began to make good on its threats by sabotaging a plant that supplies the Russian gas pipeline to China. This is a repeat of their old “you cut off our money, we cut off your energy” bluster.

There has also been a campaign to vilify Russia and blame it for jacking up gas prices in Europe. What has happened is that the spot market has been manipulated to make it appear gas prices are rising by several hundred percent. However, most of the gas is sold through long-term contracts and these spot market manipulations have little real effect.

According to Russia’s FSB, the Oligarchs hiding in Switzerland are jacking up food and energy prices around the world because people are refusing to become debt slaves by borrowing money created out of nothing. “They are trying to squeeze money out of the ordinary people by hiking the prices of necessities to pay their debts,” the source explained.

There is also a lot of intrigue in Switzerland centering around attempts to monetize historical Asian and other bonds, according to Asian dragon family sources. It turns out that a son of former Philippine leader Ferdinand Marcos (from an earlier marriage to an Asian royal) was allowing the Rothschilds and Rockefellers to cash historical bonds via UBS and Goldman Sachs. This was what was ultimately behind the Malaysian 1MBD financial scandal, the source says.

Apparently, this Marcos heir is now dead and all the associated funds have been “taken out of the system,” he says. “The Marcos era is over,” the source concluded.

The source also said, “there have been a lot of arrests in Zurich this week and a lot of would-be bond owners have been killed.”

The source said the Bank of China, the Bank of America, Wells Fargo and HSBC were now involved in setting up a new and uncorrupt quantum financial system.

In any case, yet another reason the Khazarian mafia is running out of money is that they are apparently losing heroin revenue from Afghanistan. That is why “ISIS” (Rockefeller/Rothschild mercenaries) are trying to terrorize Afghanistan and the Taliban are fighting back:

Taliban spokesman Zabihullah Mujahid said Monday that the Taliban raided a hideout for the Afghan ISIS affiliate, known as ISIS-K in a “decisive and successful attack,”

This caused Michael Kugelman, deputy director of the Asia Program at the U.S.-based Wilson Center, to threaten that “Friday’s attack [on a mosque in Afghanistan] could be a harbinger of more violence.”

Nonetheless, Taliban political spokesman Suhail Shaheen told The Associated Press there would be no cooperation with Washington on containing the increasingly active “ISIS” group. In other words, despite the threats, “no more heroin money for you.”

The Khazarian mob is now getting ready to hold an emergency meeting of their top servants to try to save the day. That is why the fake Pope Francis met on Saturday with U.S. House Speaker Nancy Pelosi. 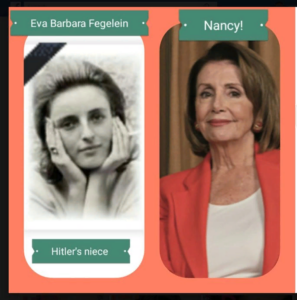 Pelosi is in Rome for a panicked gathering of G20 slaves.

In what may be related we also note this seemingly disturbing news item:

Private capital would be barred from news gathering and distribution operations, according to a public consultation paper posted on the website of National Development and Reform Commission, China’s top economic planner.

However, CIA sources in Asia say the target of this move may be the Rockefellers. They note that a certain “Jeff Shell works at Rockefeller Plaza and is endorsing China. He is THE ONLY EMPLOYEE at Peacock TV LLC, which controls 2,428 companies.”

Here is more about MSNBC & NBC (Remember, the MS in MSNBC stands for Microsoft) and Their China Partnership.

“Both MSNBC and NBC News are operated by NBC Universal, a company with extensive financial ties to the CCP. In November 2010, NBC signed an agreement with China’s state-run media organization, Xinhua, to establish a business cooperation in international broadcast news. This was the latest market expansion by the CCP into American media.

Since the signing of the business deal, the U.S. State Department identified Xinhua and five other Chinese state-run media organizations as “foreign missions.” They have been identified as direct CCP operations and do not function as independent news outlets.

What this means is the Rockefellers are trying to stay in business by handing over their US corporate propaganda networks to China.

If the Chinese are just trying to remove the Rockefellers, then great. If they are trying to strangle the free press then they will end up strangling the truth and thus, eventually, themselves.

In Japan meanwhile, the Rockefeller/Rothschild rule is clearly ending. The new government of Prime Minister Fumio Kishida is planning to restart the economic planning agency that was key to Japan’s post-war high growth. The so-called Covid pandemic has also suddenly ended here.

This may be related to the fact that months ago Japanese police were given paper documents proving that a certain Robert Rothschild had patented a Covid detection method in 2015. This set off a slow Interpol fuse that is now blowing up Rothschild, Rockefeller and Khazarian mafia rule worldwide.