(Kyle Becker) Donald Trump has some advice for Republicans who may be tempted to cut a deal with Democrats on their colossal $3.5 trillion infrastructure package. 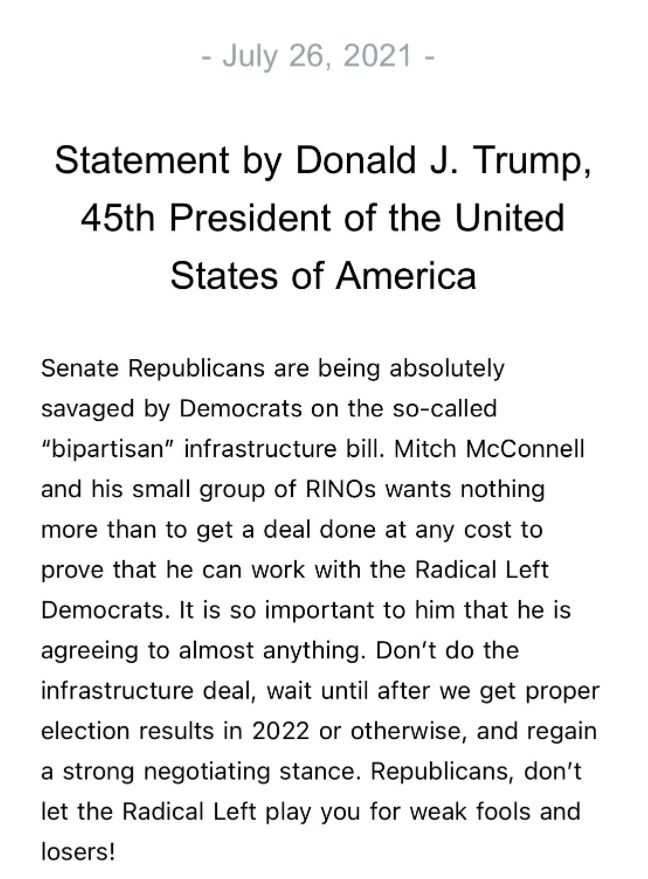 “Senate Republicans are being absolutely savaged by Democrats on the so-called ‘bipartisan’ infrastructure bill,” Trump wrote. “Mitch McConnell and his small group of RINOs wants nothing more than to get a deal done at any cost to prove that he can work with the Radical Left Democrats.”

“It is so important to him that he is agreeing to almost anything,” Trump added. “Don’t do the infrastructure deal, wait until we get proper election results in 2022 or otherwise, and regain a strong negotiation stance.”

“Republicans, don’t let the Radical Left play you for weak fools and losers!” he concluded.

Last Monday, a failed Senate test vote dealt a blow to the $3.5 trillion spending blowout. The Republicans have countered with a $1.2 trillion proposal that sheds a lot of the ‘progressive’ items on climate change, union handouts, and kickbacks to radical groups.

Also buried in the infrastructure bill was a ‘pathway to citizenship’ for tens of millions of illegal immigrants/prospective Democrat voters. The Democrats were seeking to pass the bill through reconciliation, although this would be an egregious abuse of the process that is of dubious constitutional merit.

Even a CNN host highlighted the infrastructure bill was “very progressive,” meaning radical and costly.

“The policy is very progressive,” Abby Phillip confessed. “The policy is not, you know, moderate. This is someone who is proposing $3.5 trillion in spending in a reconciliation bill on top of over a trillion dollars in spending on an infrastructure bill.”

At a “Rally to Protect Our Elections” in Phoenix on Saturday night, Donald Trump gave some of his strongest criticism yet of the 2020 election.

“The 2020 election was a total disgrace,” Trump said. You can watch the clip below:

“And I tell this to people, I tell it to Republicans, and a lot of them are very good people,” he continued. “And they say, ‘well, sir, we have to get on to the future’.”