Joe Biden spoke for ten minutes about vaccinations Thursday, with his ever present handler Kamala Harris lurking behind him. At one point he even called her ‘President Harris’.

Only around 1000 people bothered tuning in again via the White House YouTube channel: 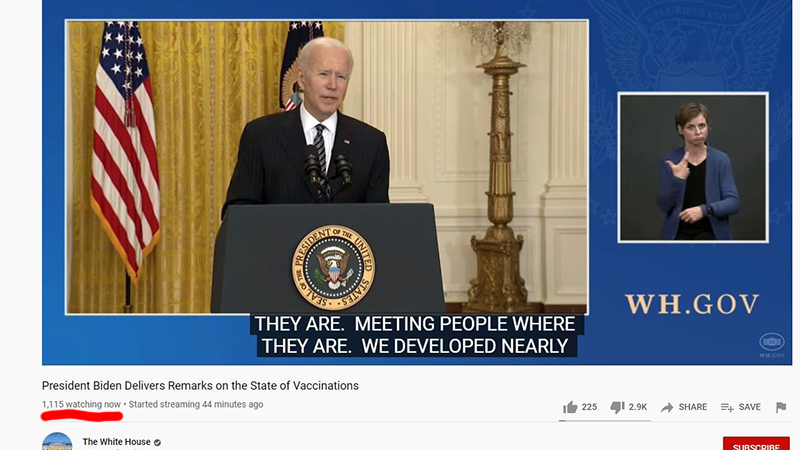 Amid the squinty eyed teleprompter reading he stated “Now when President Harris and I took a virtual tour of a vaccination center in Arizona not long ago, one of the nurses on that, on that tour injecting people, giving vaccinations, said that each shot was like administering a dose of hope.”

Of course, this isn’t the first time he has done this, and it won’t be the last.

Hardly surprising given that the ever lurking Harris is acting as the president and calling herself president while Biden naps and doesn’t know where he is.

Well… you can’t say she didn’t warn us… #PresidentHarris pic.twitter.com/Ah8eZMsxRB

He’s literally incapable of getting even the basics right. #PresidentHarris pic.twitter.com/FlempiyA22

Biden supporters will go to their grave screaming "BUT TRUMP" in defense of his gaffes. #PresidentHarris