(News Editors) An online mainstream media outlet was caught deleting a fact-check tweet on Kamala Harris and then replacing it with one that omitted the fact-check:

Related President Kamala Harris? VP Has Been Taking Calls with World Leaders on Behalf of Biden

FOX NEWS – Axios drew criticism Monday after it deleted a tweet fact-checking Vice President Kamala Harris, who repeated the debunked claim that the Biden administration is “starting from scratch” with its coronavirus vaccine rollout.

During an interview with Axios co-founder Mike Allen that aired on HBO Sunday, Harris was asked about the struggles of the administration’s response to the pandemic after nearly one month in office.

“There was no stockpile … of vaccines,” Harris responded. “There was no national strategy or plan for vaccinations. We were leaving it to the states and local leaders to try and figure it out. And so in many ways, we’re starting from scratch on something that’s been raging for almost an entire year!”

“We certainly are not starting from scratch because there is activity going on in the distribution,” Fauci said during a White House press briefing.

Below is a screenshot of the tweet, which Axios then deleted yesterday: 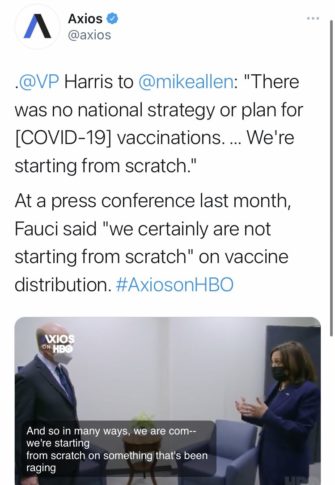 Stephen Miller was quick to point out the obvious, given that an Axios reporter is dating TJ Ducklow, a now former White House official:

Axios deleting this tweet seems suspicious given the revelations that a reporter for them who covers Kamala Harris is head over heels in love with a now former Biden Administration member. See the problem now guys? @mikeallen pic.twitter.com/U8v28h2kug

.@VP Harris: "There was no national strategy or plan for vaccinations. … We're starting from scratch."@mikeallen: Are you having to adjust your sights now of what’s possible, given that?@VP: "We've gotta figure out a way. … No patience for, 'It can't be done.'" #AxiosOnHBO pic.twitter.com/opif5rjg96

The last time we covered Axios deleting a tweet, they at least admitted that they got the Trump fish tank cleaner story wrong. But in this case I don’t think they admitted anything. They just removed the Fauci fact-check tweet and secretly replaced it with propaganda.

If I had to guess, their left-wing followers were probably outraged that they fact-checked the first black VP or something. That is generally the way this goes. Or maybe Kamala called them to yell at them about it. Who knows. Whatever the case, where is the obligation to the truth? Trump never got this kind of treatment from the media – in fact it was often the opposite. As in the example of the fish tank cleaner story, Axios and others ran with a phony story to hurt Trump, only to have to delete it later when they were exposed. And how many times did the MSM run with a phony Trump story without checking? Too many times to count. But they’re going to check with Biden and Kamala, even if it means hiding the truth.