(Good News Network) Chico is a nine-year-old yellow-crowned Amazon parrot. A species native to tropical South America, these birds are able to repeat human speech in a clear voice and can live often up to an astonishing 100 years old.

Based at Lincolnshire Wildlife Park, Chico has been amazing customers with his performances since arriving at the Boston sanctuary 18 months ago.

Footage of him singing an impressive rendition of Beyonce’s ‘If I Were A Boy’ has gone deservedly viral since being uploaded on Facebook by the park—the video has been viewed more than 100,000 times.

Chico can be heard hitting all the right notes as he sings the opening lines to the 2008 hit by the US megastar (on listening, you might also be able to hear visitors chuckle in the background).

The talented bird can also mimic other pop tracks such as ‘Poker Face’ by Lady Gaga, ‘Firework’ by Katy Perry, and ‘You Drive Me Crazy’ by Gnarls Barkley. 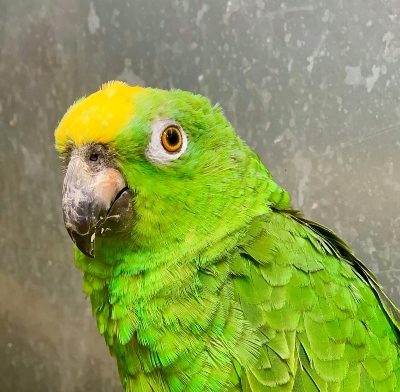 Lincolnshire Wildlife Park CEO Steve Nichols, joked, “Who’d have ever thought that a parrot would cause social distancing problems due to being so popular?”

A regular visitor, Graham Gardner, said, “People can’t get enough of him, there’s always a line of people waiting to see him—it’s like he’s an actual pop star at times… He’ll just break into song randomly and it leaves people in hysterics.

“He’s actually got a very good voice,” Graham explained, saying, “Maybe Simon Cowell might get in touch, you never know.”

(WATCH the video of Chico belting out Beyoncé’s famous tune below.)