(Stillness in the Storm Editor) Benjamin Fulford’s report from May 25th, 2020 has been updated. Click here to read the full report. This post serves as a notice that the original has been updated. Scroll down to where it says:

Gates has survived recently by paying a $200 million bribe to the triads according to Asian secret societies and, according to the P3, a massive bribe to the Mafia for protection.  However, the U.S. military White Hats cannot be bribed and are now actively hunting down the doomed Gates.

Bill and Melinda gates have already killed and maimed hundreds of thousands of people through tainted vaccines.  Take a look at this Bill Gates’ Dr. Strangelove moment where he can’t contain his happiness at the thought of injecting GMOs into the veins of little kids’ arms: Dr.StrangeGates 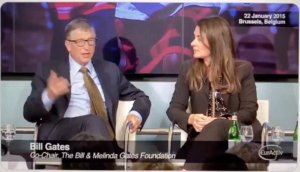 Now let us look in more detail at exactly what was planned with the -now ending- COVID-19 fake pandemic show.  We now know that a bioweapon was created with the intention of killing millions of people but human herd immunity apparently rendered it impotent.  That is why they were forced to blame natural deaths of mostly elderly people on COVID-19.

We are learning from multiple intelligence agency sources including MI6, P3 Freemasons and the NSA what the real sinister Certificate of Vaccination ID (Covid) plan was.  The sources say the plan was to inject the population with microchips designed to interact with 5G electromagnetic waves in order to control people.  This sounds far-fetched but the proof is overwhelming.  Keep in mind that Bill Gates got his fortune from the IBM Watson family that was infamous for using tattoos to track holocaust victims.

According to P3 freemasons, all 700 members of the German Parliament have been sent the proof of this beyond Orwellian population control plot.  Our readers can see some of it like this patent for a cryptocurrency that works by using network-connected sensors linked to “the sensed body activity of the user.” https://patentscope2.wipo.int/search/en/detail.jsf?docId=WO2020060606&fbclid=IwAR01AjQNs5ow5WWY9577Takel84VOo90aAX0vJpVu47KD7yn5bi71FBOewE

Previously Chinese freemasons told us the Chinese government wanted to live-monitor their entire population and give them a “social credit score,” in order to maximize their control.  Clearly the attempt at Wuhan to take this to the next level using 5G was a Chernobyl style disaster.  NSA sources are now saying that as many as 20-million people may have died as a result.

The German MPs were also shown proof that 5G transmission nodes were meant to control sensors injected into people.  Below you can see a video of a British telecoms technician discovering the 5G equipment he was installing had COVID-19 written on it. https://streamable.com/k5cxkb?fbclid=IwAR1waPVEFGY52fys_KlmE_ZlhCRpW6wXOLpSi_xEiw90u-i_xFKyjIkgf2s

Related 5G Tower Tech Discovers “COV 19” Written on Circuit Board — Is this Proof of a Coronavirus 5G Connection?

Now take another look at this clip of the London Olympic opening ceremony and you can see this so-called Coronavirus pandemic was planned over 8 years ago.. https://crazzfiles.com/opening-ceremony-of-the-2012-london-olympics-used-predictive-programming-to-show-us-the-coming-covid-19-plannedemic/

This tweet from Henry Makow shows the planning probably went back even further:

“’Dead Zone’ TV show from 2003 mentions corona virus, talks about the Hydroxychloroquine being the cure, and ‘lockdown.’”

"Dead Zone" TV show from 2003 mentions corona virus, talks about the Hydroxychloroquine being the cure, and "lockdown."https://t.co/CJWPQJDUTP

What this means is that the Khazarian mafia works according to long-term plans.  Zagami once said it was all timed according to planetary movements.  So, in order to overthrow them, we need to disrupt their plans with immediate, unpredictable here and now attacks.

Apart from the legal attacks mentioned at the top of this article and the secret war to remove their leadership, the COVID campaign has revealed another key to their overthrow – television.  A scientific study shows that for the population as a whole “overall, the ratio of TV to online news – including both desktop and mobile devices — is more than five to one (54 min versus 9.7 min).” https://advances.sciencemag.org/content/6/14/eaay3539

Since these TV networks are over 90% controlled by Khazarian mafia families, they need to be physically occupied by military forces in order to provide the majority of the population with truth.  Without their control of TV the Khazarians never could have forced all those sheeple to wear uncomfortable facemasks for no good reason. https://advances.sciencemag.org/content/6/14/eaay3539

Finally, we have the following picture sent by an Australian source who says:

“When the Queen addresses Parliament in the UK, she has to dress in her royal outfit as shown on the left.  This would include a crown, a sash, royal cape and chain of honor.  The Queen needs to wear a long dress and have her hands covered with gloves.  A King would need to wear his military outfit with a sword and a chain of honor and his crown.

When a Royal has had her or his title and honor taken away, under old English law, the Queen or King cannot wear the crown of England on her or his head.  Whenever appearing at public engagements, the chain of honor can no longer be worn and now only plain street clothes are permitted.  When they need to address Parliament they can never be seen as heads of state again, but have to go through the motions of such actions.” 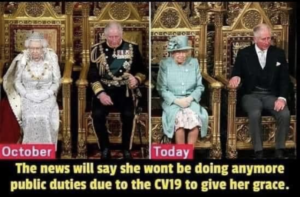 Today it appears that the head of the Committee of 300 has been stripped of power.  “The Queen was relieved of her duties because of high level criminality and corruption,” a European Royal Family source says.

There is a lot more going on behind the scenes to liberate humanity.  This is taking time because we need to rely on analogue communications for reasons of operational security.  This is because the gnostic illuminati were telling the truth when they said the real enemy was a rogue artificial intelligence.  This AI doesn’t have access to analogue communications.  Only the creator and the creation have that.