Source – Think About It

A former Nevada State Senatorial candidate, he is the son of William P. Lear, designer of the Lear Jet executive airplane, the 8-track stereo, and founder of the Lear Siegler Corporation. John Lear became interested in the subject of UFO’s 13 months prior to the date given below, after talking with a friend in the United States Air Force by the name of Greg Wilson who had witnessed a UFO landing at Bentwaters AFB, near London, England, during which three small ‘gray‘ aliens walked up to the Wing Commander. Since then Lear has tapped his contacts in intelligence, investigating the allegations that the executive and military-industrial branches of the United States ‘government‘ knows about, and colludes with, alien forces. Lear no longer suggests the following scenario is a ‘possibility‘, he emphatically states that the aliens are here and that many of them bode us ill.”It started after World War II,” he begins.

“We [the Allied forces] recovered some alien technology from Germany — not all that they had; some of it disappeared. It appears that sometime in the late ’30s, Germany recovered a saucer. What happened to it we don’t know. But what we did get was some kind of ray gun…”

The following is a “Public Statement” released by John Lear on December 29, 1987, and revised on March 25, 1988. It was originally sent to some of Lear’s personal friends and research associates who in turn put pressure on the Ace Pilot to release this information publicly. The first version of the statement was apparently meant for the ‘inside’ crowd of researchers with whom Lear associated, whereas the following revision contains the same information as the first edition, yet is directed towards the public in general:

NOTE TO THE PRESS:

THE SECOND TRUTH HAS GOTTEN FAR MORE PEOPLE KILLED TRYING TO STATE IT PUBLICLY THAN WILL EVER BE KNOWN.

(Note: emphasis here and throughout this section is ours. – Branton)

“But the truth must be told. The fact that the Earth revolves around the sun was successfully suppressed by the [Roman] church for over 200 years. It eventually caused a major upheaval in the church, government, and thought. A realignment of social and traditional values. That was in the 1600s.

“In its effort to ‘protect democracy‘, our government sold us to the aliens. And here is how it happened. But before I begin, I’d like to offer a word in defense of those who bargained us away. They had the best of intentions.

“Germany may have recovered a flying saucer as early as 1939. General James H. Doolittle went to Norway in 1952 to inspect a flying saucer that had crashed there in Spitzbergen. 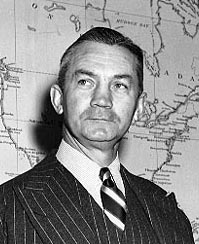 “The ‘horrible truth‘ was known by only a very few persons: They were indeed ugly little creatures, shaped like praying mantises… Of the original group that was the first to learn the ‘horrible truth‘, SEVERAL COMMITTED SUICIDE, the most prominent of which was Defense Secretary [and Secretary of the NAVY] James V. Forrestal who jumped to his death from a 16th story hospital window.

(Note: William Cooper, a former member of a Navy Intelligence briefing team, insists that Forrestal was in fact murdered by CIA agents who made his death look like a suicide. Based on sensitive documents Cooper claims to have read, two CIA agents entered the hospital room, tied a bed-sheet around Forrestal’s neck and to a light fixture, and threw him out the window to hang. The bed-sheet[s] broke and he fell to his death, screaming on his way down according to some witnesses “We’re being invaded!” – Branton).

Book Selected by Extraterrestrials: My life in the top secret world of UFOs, think-tanks and Nordic secretaries

“Secretary Forrestal’s medical records are sealed to this day.

“President Truman put a lid on the secret and turned the screws so tight that the general public still thinks that flying saucers are a joke. Have I ever got a surprise for them?

“In 1947, President Truman established a group of 12 of the top military scientific personnel of their time. They were known as MJ-12. Although the group exists today, none of the ORIGINAL members are still alive. The last one to die was Gordon Gray, former Secretary of the Army, in 1984.

“As each member passed away, the group itself appointed a new member to fill the position. There is some speculation that the group known as MJ-12 expanded to at least seven more members.

“There were several more saucer crashes in the late 1940s, one in Roswell, New Mexico; one in Aztec, New Mexico; and one near Laredo, Texas, about 30 miles inside the Mexican border.

“Consider, if you will, the position of the United States Government at that time. They proudly thought of themselves as the most powerful nation on Earth, having recently produced the atomic bomb, an achievement so stupendous, it would take Russia 4 years to catch up, and only with the help of traitors to Democracy. They had built a jet aircraft that had exceeded the speed of sound in flight. They had built jet bombers with an intercontinental range that could carry weapons of enormous destruction. The post-war era and the future seemed bright. Now imagine what it was like for those same leaders, all of whom had witnessed the panic of Orson Wells’ radio broadcast, “The War of the Worlds”, in 1938.

According to several respected researchers, alleged insiders and whistleblowers, the Deep State has been advancing secret space programs for decades, developing technology that most would consider otherworldly. The preceding information alerts the public to the fact these programs likely exist, by providing documents, testimony, and conjecture in support. This information is helpful to dispel the false reality pushed by the Deep State as well as catalyzing the mind for truth-seeking.