– The US Federal Reserve, probably 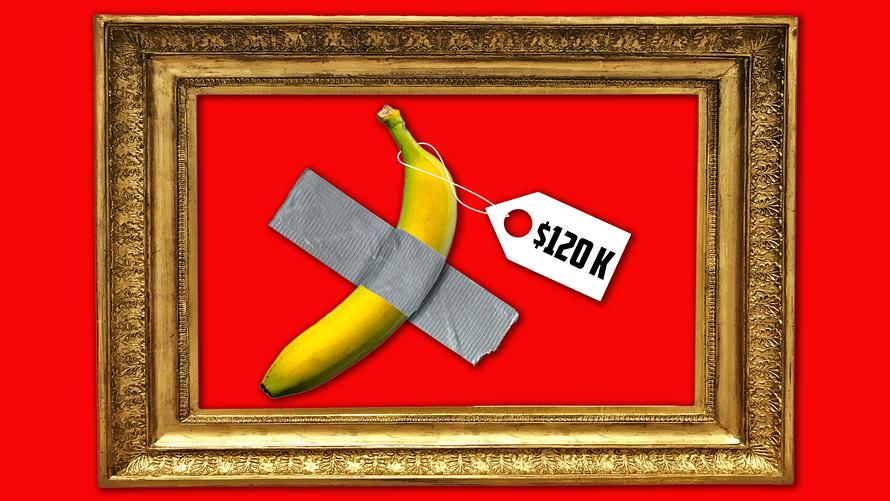 Then on Saturday, at around 1:45pm, the art world was shocked when a random man, allegedly a performance artist, ate said duct-taped banana that sold earlier this week for $120,000.

New York-based performance artist David Datuna ate the banana early on Saturday afternoon in front of a stunned convention full of “art” lovers most of whom had no idea whether they were witnessing even more “art”, of just some clueless rando eating the world’s most discussed “art” exhibit, the gallery told the Miami Herald.

This happened and here's the video: someone ripped the Maurizio Cattelan banana off the wall at @ArtBasel and ATE IT 🍌 pic.twitter.com/JOL41jLoeY

Perrotin Gallery spokesman Lucien Terras told the Herald that Datuna did not “destroy” the artwork because “the banana is the idea”, or as Magritte would say “Ceci n’est pas une banane.”

Buy Book Laughter Therapy: How to Laugh About Everything in Your Life That Isn’t Really Funny

The controversial piece, called “The Comedian,” was created by Maurizio Cattelan, an Italian artist who had also entertained art lovers from around the globe in 2017 with his “America” 18-carat-gold toilet. The $6-million throne was stolen from England’s Blenheim Palace over the summer according to CBS.

Emmanuel Perrotin, the gallery founder, told CBS News that Maurizio’s work is not just about objects, but about how objects move through the world.

“Whether affixed to the wall of an art fair booth or displayed on the cover of the New York Post, his work forces us to question how value is placed on material goods,” he said, although he could have also added “or eaten.”

He added that “the spectacle is as much a part of the work as the banana.”

Perrotin was about to head to the airport when he heard about the banana being eaten and rushed back, according to the Herald. An attendee tried to cheer him up by handing him a banana. A borrowed replacement banana was eventually re-adhered to the wall, because “art.”

Buy Book An Epidemic of Absence: A New Way of Understanding Allergies and Autoimmune Diseases Whereas the “art” world was briefly outraged after the 120,000 rotting banana was calmly eaten, unaware that they themselves were the joke, normals argued this piece is a perfect representation of what the art world has become with its gaping wealth inequalities and where idiotic “art” such as a banana duct taped to a wall sells for $120,000. Others, however, chose not to go as deep and appreciate the simplicity of the art piece. Yet others blamed the Fed for flooding the world with so much money that a banana duct taped to a wall was actually bought by someone for $120,000.

The artist first came up with the idea a year ago. He “was thinking of a sculpture that was shaped like a banana,” according to a press statement from Perrotin.

“Every time he traveled, he brought a banana with him and hung it in his hotel room to find inspiration. He made several models: first in resin, then in bronze and in painted bronze (before) finally coming back to the initial idea of a real banana.”

The artist reported no clear instructions for buyers on whether the bananas start to decompose.

As for Datuna, who calmly ate the banana in front of a room full of shocked “art” fans before he was confronted by an art gallery worker, his parting words were “see you after jail, guys.”

"Are you kidding me?"
"It's performance."
"It's absolutely not performance."
…
"See you after jail, guys!" pic.twitter.com/BHsCtNLki2

Buy Book Testosterone Boosting Cookbook: 25 Recipes that can boost your testosterone for life