However it happened, the killing of Baghdadi was a major PR win for Trump (who has been touting the fact that ISIS has been “99%” eliminated for months).  But according to Bloomberg, it almost didn’t happen. Baghdadi had previously evaded several American attacks in the weeks prior to his death, and there were some doubts about whether this critical tip was still good.

The CIA first started receiving “surprising” information about Baghdadi’s general location over the summer. According to the tips, he was hiding in a village deep inside a part of northwestern Syria controlled by rival fundamentalist groups. Per the NYT, Syrian and Iraqi Kurds were tremendously helpful in providing this information. But the final tip that helped inspire the raid came after the arrest and interrogation of one of Baghdadi’s wives and a courier, the NYT reported.

According to a Syrian engineer who spoke with villagers living near the raid site, Baghdadi had sought shelter in the home of Abu Mohammed Salama, a commander of another extremist group, Hurras al-Din. Salama’s fate is not yet clear.

Courtesy of the LA Times

As US forces prepared for the raid, Trump arrived at the White House by motorcade at about 4 pm on Saturday and hurried into the Situation Room, accompanied by VP Mike Pence, National Security Adviser Robert O’Brien, Defense Secretary Mark Esper and other military leaders. They watched the entire two-hour operation as helicopters landed and US special forces began their assault on the compound, eventually chasing Baghdadi down a dead-end tunnel where he “died like a dog”, President Trump said. 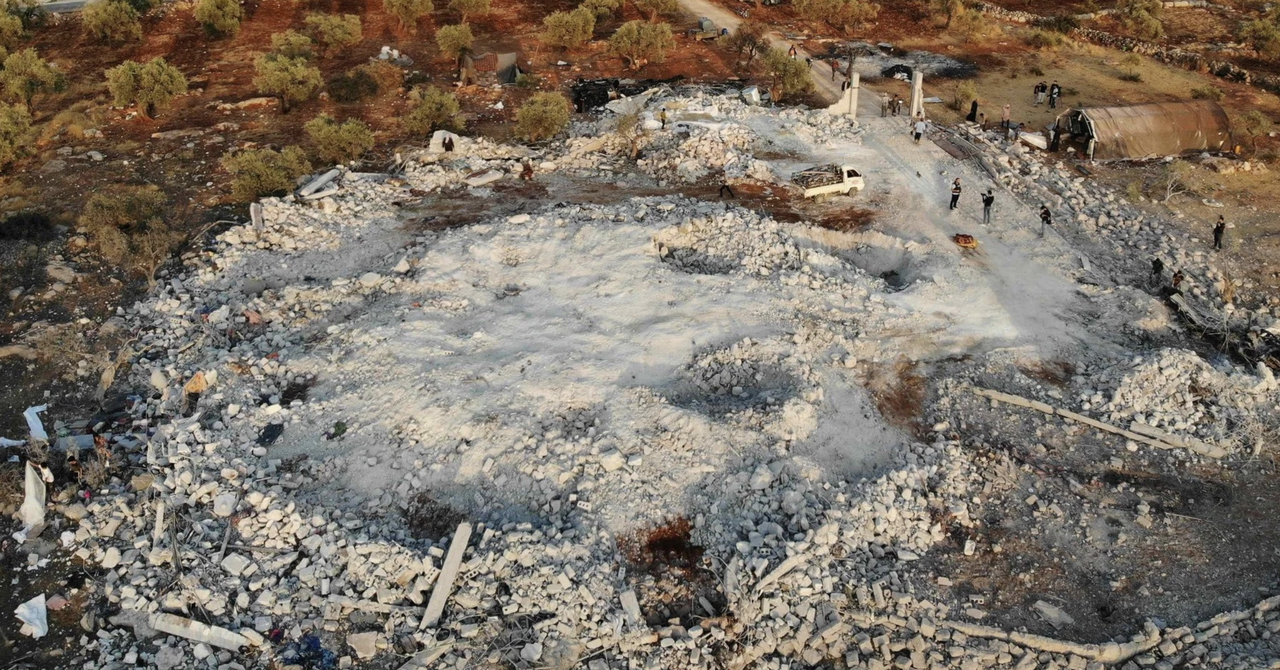 Baghdadi’s compound after the raid…

Trump first approved the mission Saturday morning, after being presented with “actionable intelligence.” US forces traveled through some Russian held territory during the raid, and alerted Moscow ahead of time.

Once they arrived, US forces “blew holes into the side of the building” to avoid traps and began their assault. They rescued 11 children and killed an unknown number of adults during the mission.

Buy Book The ISIS Conspiracy: How Israel and the West Manipulate Our Minds Through Fear

The planning for the raid, according to the New York Times, began this past summer, when the CIA received a surprising tip about al-Baghdadi’s whereabouts that placed him in a village deep inside a part of northwestern Syria controlled by a rival group. The critical “tip” came from one of al-Baghdadi’s wives and a courier, who were captured by US forces and questioned by the CIA.

Of course, just like with the raid on bin Laden, there’s something about the official story that just doesn’t seem…100%. The NYT insists that the successful raid came “in spite of” not “because of” Trump’s decision to pull US forces out of Syria. And many are already speculating that Baghdadi was only “hiding” with Turkey’s blessing, and that it now appears he was used as a bargaining chip in the negotiations between Trump and Erdogan. The Russians, meanwhile, are insisting that Baghdadi isn’t really dead. In other words, the decision to pull out of Syria was the “quid”, and information about Baghdadi’s whereabouts was the “pro quo.”

Buy Book The Red Market: On the Trail of the World’s Organ Brokers, Bone Thieves, Blood Farmers, and Child Traffickers